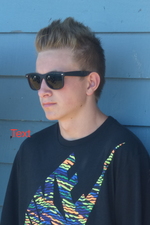 Anton Oliver Preto Bay died on 6 July 2020 in Provo, Utah. He is survived by his father, Andrew T. Bay, and his brothers Miles, Patrick, and Owen Bay. His mother, Ana Maria de Oliveira Raposo Preto-Bay, died in 2014. Anton will be interred at the Provo City Cemetery.

Anton Oliver Preto Bay (born Yurchenko Anton on 29 July 1998) was adopted in Rudnyy, Kazakhstan, by Andrew Bay and Ana Preto-Bay at age seven, three and a half years after losing his mother. An amazingly self-possessed and determined child, he willingly joined the family in Provo, Utah, and learned English in record time. Anton loved to learn and learned by doing. He liked the creativity of dismantling, fixing, and repurposing things, from skateboards to carburetors. A dreamer and entrepreneur, he constantly created logos for future businesses, imagined new products and services, and created 3-D homes on the computer for each family member. He was infatuated with technology and could intuit how phones, computers, and gaming consoles worked and set them up in innovative ways.

He was passionate about the beach, music, good food, Portugal, the family dogs Elliot and Barley, camping, longboards, ice cream, hoodies, and his family, above all. He showed many kindnesses to his brothers and especially nurtured his younger brother from the same town in Kazakhstan. His heart overflowed with good humor, generosity, and love despite the privations he’d suffered as a young child. Even in high school he’d hug his parents every night and tell them he loved them. His easy laugh, independent spirit, and proud heart endeared him to many and will long be missed.