To share your memory on the wall of Blaine Poulsen, sign in using one of the following options:

Provide comfort for the family of Blaine Poulsen with a meaningful gesture of sympathy.

After the war, this happy couple started their family. They also started a nursery business in Idaho Falls called the Snake River Nursery. During this time, Blaine served in the bishopric in the Idaho Falls 1st Ward. They bought their first home in Shelly, Idaho. The family was growing. They needed more room so they bought a bigger home out of town. While there, Blaine served as bishop of the Shelly 1st Ward for four years. The growing family consisted of Mike, Hal, Dana, Lora Lee, Randy, Mark, Lyle, Troy, and James. Blaine records how they began to think about moving closer to B.Y.U. so the kids could attend school there.

In 1963, Blaine got a job with the Grounds Department at B.Y.U. and the family moved to Provo. In 1965 Heather was added to the family as the last of 10 children. According to the kids, ‘Dad’ always did a lot of the cooking and helping with the chores. Blaine went on to work at the B.Y.U. greenhouse for 19 years. During this time, he had a big part in the selection and placement of trees on campus, which was part of his legacy. Blaine also graduated from B.Y.U. in Ornamental Horticulture in 1969.

It was around 1975 when Jean made a wrong turn that became Blaine’s greatest trial. She left the church and then left the family. Blaine (Dad) was heartbroken. It would be thirty years before she would come back into the family. He didn’t collapse under the weight of his burden. He built another life. He married Mildred Sandvic. They later went to St. George where Blaine had many happy years hiking the red cliffs, attending the temple, fulfilling two church service missions, and being ‘Grandpa’ to his own and to Mildred’s grandkids. When Mildred had to go into a care center, Blaine went with her. When she needed more intensive care, Blaine moved north to Salem, Utah to live with family there. (Blaine’s eyes were failing from macular degeneration. He could no longer drive). As usual, he endeared himself to the neighbors, friends and family here.

For more than 25 years, the annual tradition of the Poulsen family at Christmastime was to make a trip to Mexico to spend a few weeks on the beach at La Monga, the fishermen’s village. Blaine always bought 2 big pinatas filled with candy; one for the Mexican children and one for the little Poulsens. Further, in his typical fashion, he was the first one out of bed in the morning so he could get the fire started and begin the breakfast for a large family group. Forever the servant.

And Blaine continued to serve. When he first came to Salem seventeen years ago, he was ‘called’ to bring a loaf of bread for the sacrament each week for the meeting. Without any lapses, he did this until his passing.

Blaine got to travel to many places in his life (thanks to the generosity of the family). His favorite trip, which he reflected on often, was when he went to Israel with his son Mark and a grandson. Dad loved to ‘walk’ where Jesus walked. This typified his whole life; following in the footsteps of Jesus. His faith carried him through many hardships, including the early passing of 4 of the 19 children, and other loved ones who passed before their time.


In lieu of flowers, please make a donation to the Missionary Fund in honor of Blaine’s love of missionary work. Thank you.
Read Less

We encourage you to share your most beloved memories of Blaine here, so that the family and other loved ones can always see it. You can upload cherished photographs, or share your favorite stories, and can even comment on those shared by others. 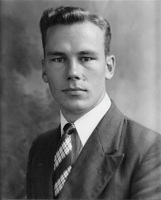