To share your memory on the wall of Brian Kuhni, sign in using one of the following options:

Brian came into this world craving knowledge and information. He sang 3 verse songs at the age of 1 in a voice so underdeveloped that it came out as a whisper. He spent most of his life trying to control his great and unique brain. Brian loved to be out of doors and moving as much as he could. He could make you laugh until your sides hurt. He was loved by all; adored by animals and small children. As a grown man, he would follow a stray cat for blocks just to pet it. He never encountered a rule he didn’t challenge or basically ignore. He was baffled by a world where people wrote laws to curtail what he considered to be the personal choices of others. Brian had a kind and generous heart. If you needed something he would give it to you or procure it for you. Or he would make it for you out of duct tape, tubing and random car parts. Brian was creative and resourceful. We often thought that if times became as rough as they are promised to be, we would all be really lucky to have Brian on our side. Thankfully he will be
there for us on the other side.

Brian was the most completely independent thinker we ever knew. He lived in survival mode, often trying to escape his racing thoughts; he truly did everything ‘his way’. Brian’s passing leaves a hole in our world so big, loud and disruptive that we will be forever finding peace.

Condolences may be offered at legacyfunerals.com.

There will only be a gathering at the graveside at the Spanish Fork City Cemetery at 12:00pm Monday, March 23, 2020. No additional viewings or gatherings are planned.
Read Less

To send flowers to the family or plant a tree in memory of Brian Kevin Kuhni, please visit our Heartfelt Sympathies Store.

Receive notifications about information and event scheduling for Brian

We encourage you to share your most beloved memories of Brian here, so that the family and other loved ones can always see it. You can upload cherished photographs, or share your favorite stories, and can even comment on those shared by others.

Posted Jun 25, 2020 at 08:40am
That obituary is spot on. Brian lived his life, his way, you have to admire that. Brian was my best friend since13 yrs of age. I had some of the best times of my life with Brian driving thru muddy roads in hobble Creek canyon trying to get stuck, we had no plan if we actually did get stuck in the middle of nowhere but we never did, somehow. I lost touch with Brian these last 2 years, and always thought there would be enough time for us to come back together, and hang out again, but life doesn't always work out how you plan it. I love Brian like a brother, and it broke my heart when I found out he passed away. Everytime with Brian was a good time, he was a real friend who had your back, and would do anything for you. I hope Kuhni family is ok. Brian was a good guy and he had a big heart. I remember one time he pulled up to my house in his black Jeep all 4 shock we're just hanging off from the frame haha I said dude we gotta fix that! He said meh, get it, let's go fix them right off the frame. haha I'm going to miss him. He was the best friend a guy could ask for he never judged anybody or cut anyone down. When we were 16-17 yrs old I bet we put 20,000 miles on that black Jeep just up hobble Creek canyon alone, and before that prob the same amount in a little red Geo tracker. I never had funner times in my life then off roading, camping and riding ATVs with my buddy Brian. We had a spot where we would ride ATVs up to this helicopter pad on top of Salem tower mtn. We would stand on that heli-pad, and say we're on top of the world, it was 1 of his favorite spots to be in the whole world. I hope he has a brand new black Jeep on the other side, and he's out getting mud splashed everywhere. We love you Brian, and you will be missed by all of us.
Comment Share
Share via:
ER

Posted Apr 02, 2020 at 01:29am
I have not read a more beautiful tribute. I went to school with Brian. He was a unique and beautiful soul. My heart and most sincere prayers your way

Your Light Shines was purchased and planted a memorial tree for the family of Brian Kuhni. Send Flowers 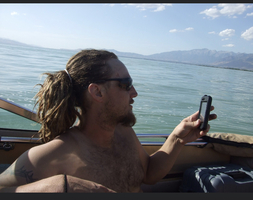