To share your memory on the wall of Dan E Knowlden, sign in using one of the following options:

Print
Dan E. Knowlden, of Springville, returned to his spiritual home on Sunday September 8th, 2019, surrounded by his devoted family.

Dan was born in Tooele, Utah on February 21, 1947, the son of Jack D. and Lucille Lawrence Knowlden. He was ... Read More
Dan E. Knowlden, of Springville, returned to his spiritual home on Sunday September 8th, 2019, surrounded by his devoted family.

Dan was born in Tooele, Utah on February 21, 1947, the son of Jack D. and Lucille Lawrence Knowlden. He was raised in a large military family. He moved a lot while growing up and lived in Japan, Taiwan, and Alaska.

Dan graduated from Anchorage High School. During the summer after graduation he worked for the FAA doing surveying in remote areas of Alaska. He loved this work and decided to make it his career. After completing the necessary training and earning the required certifications, he worked for the state of Utah for 31 years as a Design Engineer, and as a Right of Way Engineer until his retirement. He received a prestigious award for the work he did on the Intersection of University Parkway and State Street in Orem. (At that time, it was the busiest intersection in Utah). Dan was one of the few engineers asked to be on the design committee for the I-15 corridor project. He was well known and respected for his work. Additionally, he worked for two private surveying companies after his retirement. Dan was also a member of UCLS (Utah Council of Land Surveyors).

Dan was a member of the Church of Jesus Christ of Latter-Day Saints. He served an LDS mission in the Central Atlantic States. He has held many church callings including Bishop and Branch President. Later in life he and his wife Patricia served an LDS mission in Seoul, Korea. He absolutely loved the Korean culture, food, and the people there. He has been a man of service and is well loved by those he has served.

Dan loved to read—especially action-packed books. He enjoyed yard work and home improvement projects until his health no longer allowed it. He loved to travel. He had been on many cruises, a return trip to Korea, Hawaii several times, and of course the yearly family trip to Snowbird for a week in September.

Dan was diagnosed with terminal liver cancer in May of 2018 and fought so hard to stay here with us. We are so proud of him for his positivity, strength, and courage—he truly endured to the end. “Behold, I am the law, and the light. Look unto me, and endure to the end, and ye shall live; for unto him that endureth to the end I will give eternal life.” 3 NE. 15:9
Read Less

To send flowers to the family or plant a tree in memory of Dan E Knowlden, please visit our Heartfelt Sympathies Store.

Receive notifications about information and event scheduling for Dan E

We encourage you to share your most beloved memories of Dan E here, so that the family and other loved ones can always see it. You can upload cherished photographs, or share your favorite stories, and can even comment on those shared by others.

Posted Sep 16, 2019 at 12:30am
I served with Dan in the Central Atlantic States mission and we went on exchange many times. He was a load of fun and hearing that he served as a bishop was almost as surprising as he would have been with me serving, too. I always wondered what would become of Dan since this is the first I've heard since 1971. I'm proud of what he made of his life and his family. See you on the other side, Dan!
Comment Share
Share via:
AJ

Posted Sep 13, 2019 at 07:29pm
I worked with Dan at UDOT many years ago. He was a good project designer as well as a surveyor. He was always positive and friendly to everyone. He was well respected by all those that knew him.
Comment Share
Share via:
EB

Posted Sep 11, 2019 at 03:03am
I have so many memories of my big brother Dan E. , but I will share a couple. The first one I would like to share is what an amazing brother he was when we were little he would come into our room when we were stay at Grandma and Grandpa Lawrences. We were excited because we didn't get to be around them much being in the military. When he came in he would lay down one the rollaway with us and make up stories...aka Nicker Bocker Snocker Rocker best big brother ever!!

The second one was when we lived on base, Mom and Dad had gone somewhere, and left Dan E in charge of us...I wanted to ride my bike , but Dan locked it in the garage. I was extremely upset, he also locked the screen door, so I couldn't get in...I told him if he didn't unlock the garage I would put my hand through the glass on the screen door. I counted to ten, and then put my hand through the glass cutting my wrist. I guess I was a bit of a brat....LOL I shall miss him so much, but find comfort in knowing we are an eternal family. I also know that it is only his physical body that is gone.... his spirit lives on, and will forever be with us until we are reunited in the hereafter. I love you Dan E. give everyone hugs and kisses from me XOXOXOX
Always your little sister, Emma Jane
Comment Share
Share via:

Posted Sep 11, 2019 at 02:08am
A couple of memories I have of Dan and me. Our families were visiting grandpa Charles and grandma Viera in Tooele. It was a hot and windy day and as much as I can recall, we were both about 10 or 12 years old when this happened. Dan and I were playing in a large field of tall dry grass. It was located just behind and north of the greenhouse. We sat down in the middle of the field and Dan took out a book of matches from his pocket and began lighting some of them. I'm sure you know where this story's headed! Anyway, I don't recall exactly how it happened but either the wind blew some of the dry grass against the lit match or he dropped it. Immediately a fire ensued, it took only what seemed like a matter of seconds for the whole field to be engulfed! We literally ran for our lives and just barely made it out in time! I don't think that either of us had run that fast in our lives! We were so scared, that we just kept running and could hear the siren going off to alert the volunteer firemen! It seems like the fire station was not too far away from the burning field. What made matters worse is that grandpa Lawrence was a member of the volunteer fire department and had to help put it out! I don't remember much after that, but I never even thought of playing with matches after that!

The second story happened at Hill Air Force Base at night during the summer. Dan and I were playing in what seemed like a foxhole that he had dug not too far from the runway. I remember that the entire runway was visible and we were watching fighter jets taking off and landing. At one point a pair of the jet fighters were lined up in a staggered formation to take off at the same time. I remember getting a premonition that these two planes would collide and crash at the end of the runway. As we watched both planes hit their afterburners and began racing down the runway, one either slowed down a bit or the one in the rear sped up. They ended up hitting wings as they lifted off and crashed and crashed at the end of the runway. We both sat there stunned by what we had just witnessed! I remember feeling guilty because I thought I had caused them to crash. It took me a long time after that to watch planes in the air for fear that I would make them crash!
Comment Share
Share via:
J

Posted Sep 10, 2019 at 08:12pm
I shall never forget his courage and spirit as he shared his last testimony with us in testimony meeting. He was an example of strength in the Gospel. Joyce
Comment Share
Share via: 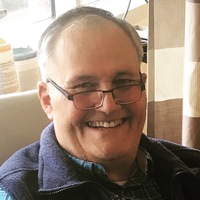 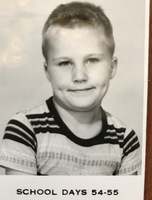