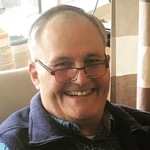 Dan E. Knowlden, of Springville, returned to his spiritual home on Sunday September 8th, 2019, surrounded by his devoted family.

Dan was born in Tooele, Utah on February 21, 1947, the son of Jack D. and Lucille Lawrence Knowlden. He was raised in a large military family. He moved a lot while growing up and lived in Japan, Taiwan, and Alaska.

Dan graduated from Anchorage High School. During the summer after graduation he worked for the FAA doing surveying in remote areas of Alaska. He loved this work and decided to make it his career. After completing the necessary training and earning the required certifications, he worked for the state of Utah for 31 years as a Design Engineer, and as a Right of Way Engineer until his retirement. He received a prestigious award for the work he did on the Intersection of University Parkway and State Street in Orem. (At that time, it was the busiest intersection in Utah). Dan was one of the few engineers asked to be on the design committee for the I-15 corridor project. He was well known and respected for his work. Additionally, he worked for two private surveying companies after his retirement. Dan was also a member of UCLS (Utah Council of Land Surveyors).

Dan was a member of the Church of Jesus Christ of Latter-Day Saints. He served an LDS mission in the Central Atlantic States. He has held many church callings including Bishop and Branch President. Later in life he and his wife Patricia served an LDS mission in Seoul, Korea. He absolutely loved the Korean culture, food, and the people there. He has been a man of service and is well loved by those he has served.

Dan loved to read—especially action-packed books. He enjoyed yard work and home improvement projects until his health no longer allowed it. He loved to travel. He had been on many cruises, a return trip to Korea, Hawaii several times, and of course the yearly family trip to Snowbird for a week in September.

Dan was diagnosed with terminal liver cancer in May of 2018 and fought so hard to stay here with us. We are so proud of him for his positivity, strength, and courage—he truly endured to the end. “Behold, I am the law, and the light. Look unto me, and endure to the end, and ye shall live; for unto him that endureth to the end I will give eternal life.” 3 NE. 15:9