To share your memory on the wall of David Watters, sign in using one of the following options:

We lost a generous, funny, loving, and brilliant person on Saturday May 29, 2021. Dr. David Hoffman Watters of Woodland Hills, Utah passed away at home from complications of several chronic medical conditions.

David was born September 13th, 1948 to Harold Jesse Watters and Grace Marie Watters, in Panama City, Florida. He was the second of two sons. He grew up in many different places including the Canal Zone in Panama, Alaska, and more, as his father was in the Air Force. In his teen years his family settled in Norman, Oklahoma. His first date with Linda Jean Childress was their high school senior ball. They were married April 1, 1969.

David Watters attended Oklahoma University and Medical School. His medical residency was in the Air Force at Travis Air Force Base in California. He was later discharged with the rank of Lieutenant Colonel. In 1981, David and Linda built a home in Woodland Hills, Utah. He was a “founding father” of Mountain View Radiology (now called Revere Imaging) and worked as a radiologist at Mountain View Hospital and associated locations from 1981 until 2018. The practice grew from two physicians to its current 14.

David will be remembered for his generosity and unique sense of humor. He had a vast knowledge of all things scientific. He could identify any insect, usually including the scientific name. He spent countless hours coaching kids’ teams, taking his kids on vacations and adventures, and teaching them about a vast variety of things.

A private family memorial will be held at a later date.

To leave condolences or share a memory of David, visit www.legacyfunerals.com
Read Less

Receive notifications about information and event scheduling for David

There are no events scheduled. You can still show your support by sending flowers directly to the family, or planting a memorial tree in memory of David Hoffman Watters.
Plant a Tree

Posted Jun 05, 2021 at 05:50am
I can't express enough our heartfelt sadness at David's passing. I have known the Watter's for 38 years and consider them some of our closest friends. We have been immediate neighbors and loved them without bounds. We leave our prayers for Linda and all the family. May the blessings of the spirit bring comfort and peace to all. Love, Randal and Diane Gibb
Comment Share
Share via: 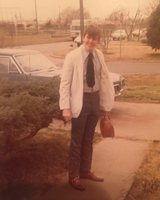