To share your memory on the wall of Don Barney, sign in using one of the following options:

Born in Thornton, Idaho on December 21, 1934 to Lucinda and Ray Barney, Don was a self-described “social butterfly.” He was on the student body council all through high school and served as class president his junior year before graduating from Spanish Fork High School in 1953.

Eager to see the world, Don volunteered for the draft straight after graduation. He went to jump school and was a paratrooper in the North Carolina 82nd airborne, where he completed 29 jumps. Don loved politics and continued to give back to his country through political engagement throughout his life.

Don attended Snow College, where he demonstrated his leadership skills as class president, his athletic capabilities as a football player and his social prowess as Snow College’s Most Preferred Man. After earning his associate’s degree in 1959, he went on to graduate from Utah State University in 1963 with a degree in education.

Don spent most of his professional life working in construction and continued to serve in leadership capacities wherever he went. He was elected to the Board of Operating Engineers, where he served for 12 years, and he sat also on the board for the Operating Engineers Credit Union. He retired from the union in 1992.

Don married Merle Koyle in 1958 and is survived by their three children: Boyd (Becky) Barney, Necia (Marty) Stevens, and Leslee (Butch) Padilla. The couple later divorced, and Don married Nadine Angus in 1985. They were sealed for time and eternity in The Church of Jesus Christ of Latter-day Saints’ Provo temple on April 21, 2012. She preceded him in death and he was eager to greet her in heaven.

He is survived by his three stepchildren: Kenneth (Cindy) Manning, Darren (Kellie) Manning and Justin Manning. His stepson M. Edwin Manning preceded him in death. Don also leaves behind 21 grandchildren and 35 great grandchildren. He was close to his family and to his dear neighbors and friends Alex and Rocio Cardenas and Natty Meza.

To send flowers to the family or plant a tree in memory of Don Curtis Barney, please visit our Heartfelt Sympathies Store.

Receive notifications about information and event scheduling for Don

We encourage you to share your most beloved memories of Don here, so that the family and other loved ones can always see it. You can upload cherished photographs, or share your favorite stories, and can even comment on those shared by others.

Posted Jan 28, 2019 at 10:56pm
Don, you were such a good example of love sweetness and acceptance. Loved you in Legacy House and visiting you can hear you laugh branded in my memory of you LOVE YOU DON
Comment Share
Share via:
CH 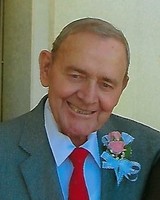