To share your memory on the wall of Frederick Steers, sign in using one of the following options:

He attended William Penn School in Peckham, London, but much of his education was from the school of life. Growing up in London during WWII taught him the value of hard work and how to get things done when times were tough. During his teen years Fred was a keen boxer and became the amateur boxing champion of Great Britain in 1952 for the 117lb weight division.

It was during his time in the British Army (1958-1959), serving on the island of Cyprus that he met his wife, Greta. She was attracted to the tall handsome man with the whitest of teeth and found he was also a big romantic softie. They married 28th January 1961 in Edinburgh, Scotland.

They emigrated to Australia in 1963 to start a new life and to find adventure. It was during his time in Australia that Fred met the missionaries and joined the Church of Jesus Christ of Latter-day Saints. He has been a faithful member ever since.

It was time to return home in 1972 and Fred brought his family back to Britain and after a long cold year in London, they moved up to Carnoustie, Scotland. Fred was working in retail by this point and was the manager for several stores and businesses throughout the UK.

Eventually there became a powerful draw of grandkids in the US and Fred & Greta moved to Vernal, Utah in 1991. After retiring Fred couldn’t slow down and became a qualified soccer referee and a member of the board of directors for the Utah Chapter of AYSO.

Fred showed his love through service. He was always willing to help, the more physical the task at hand, the happier he was. He would often take a vacation to visit his children and spend much of the time painting rooms or repairing things in the house that needed some attention.

One of his best qualities was to make people feel comfortable in his presence. He made long-lasting friendships wherever he went. We love him dearly and will miss his couthie spirit.
Read Less

To send flowers to the family or plant a tree in memory of Frederick Steers, please visit our Heartfelt Sympathies Store.

We encourage you to share your most beloved memories of Frederick here, so that the family and other loved ones can always see it. You can upload cherished photographs, or share your favorite stories, and can even comment on those shared by others.

Charlie, Richard, Donna, Colin, and Nigel sent flowers to the family of Frederick Steers.
Show you care by sending flowers

Flowers were purchased for the family of Frederick Steers. Send Flowers 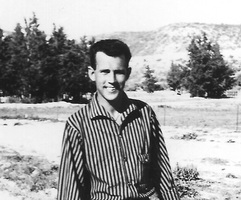