To share your memory on the wall of Geoffrey Pace, sign in using one of the following options:

Geoffrey Loren Pace, 74, passed away peacefully on June 1, 2021 in the presence of his loving wife Julia Ann Pace.

Geoffrey Loren Pace, 74, passed away peacefully on June 1, 2021 in the presence of his loving wife Julia Ann Pace.

Geoff had an unmatched enthusiasm and excitement for life. He enjoyed meeting and interacting with others. He had a life full of many wonderful and incredible experiences. Throughout his life he held numerous positions in a wide variety of industries. He was a camp counselor, salesman, military security, and an Armed Forces broadcaster for a remote Alaskan weather station, putting on a radio show broadcast for the troops in Vietnam. Whether it was his work as a sand blaster of bridges, a life guard on the water or cleaning horse stalls consumed in ammonia Geoff always kept himself busy.

After his military stint, he went big in the entertainment world. Geoff was John Travolta before John Travolta ever became known in Disco. Geoff and two others in California started the trend in 1974 long before Travolta got into the act.

Geoff was a fountain of knowledge and had an innate ability to retain information and recall facts about an infinite number of events and subjects.

Geoff’s first wife bore him two girls and one son. After they divorced, he lost touch with his children. Despite constant petitioning for visitation, his children eventually turned him down and sent his letters back to him marked “Return to Sender.”

Later in life Geoff became a successful legislative researcher for political issues of the day and a top salesman for the company GenealogyBank.com which quickly became his passion. He spent innumerable hours in front of the computer on FamilySearch.org doing genealogy while subsequently performing work in the LDS temple. So instead of saving the world through political research, he was doing it proudly through temple and family history work.

Geoff had a deep love for God, family and his country. He fostered a belief in doing good for all mankind. Despite the challenges and trials of this mortal life, Geoff always carried with him a positive disposition and optimism for the future.

Now in his “Winter Years” he found solace living with his wife at a niece's home in Springville. After numerous life experiences it could be said of him, “He tried – Oh Lord – How he tried...”

Rest in peace, dear Geoffrey, you are home now. Free at last!

Geoff is survived by his wife, two sisters, their children, grandchildren, and numerous nieces and nephews. He is preceded in death by his parents.

To send flowers to the family or plant a tree in memory of Geoffrey Loren Pace, please visit our Heartfelt Sympathies Store.

Receive notifications about information and event scheduling for Geoffrey

We encourage you to share your most beloved memories of Geoffrey here, so that the family and other loved ones can always see it. You can upload cherished photographs, or share your favorite stories, and can even comment on those shared by others.

Posted Jun 08, 2021 at 03:41pm
My sincere condolences to geoffrey’s wife and sisters. I went to grade school in Carey , Ohio with him and he was always interesting and fun may he Rest In Peace Ruth Black Raudabaugh
Comment Share
Share via: 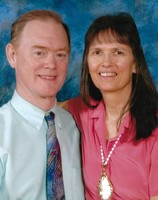