To share your memory on the wall of Gerald Jensen, sign in using one of the following options:

He enlisted in the Navy and served during WW11. After his military service, he returned home
where he played football for and attended BYU. Gerald was employed with Sears for 10 years
as a Service Manager but most of his career was spent with Provo City Power as a
Stationary Engineer, he retired from Provo City after 35 years. Gerald was a devoted member
of the Church of Jesus Christ of Latter-Day Saints and served as a Stake Missionary,
served in the Bishopric and many other ward and stake auxiliaries.

Gerald loved to golf, was a member of the Cougar Club and had a great love for the
outdoors. After retirement, Gerald and Lois spent a great deal of time traveling and
camping with family until Lois’s death in 1999.

He is proceeded in death by his parents, wife Lois Anderson Jensen, a sister Verna
Jensen Rohbock, and a brother Clifton Jensen.

To send condolences, and share memories of Gerald, go to www.legacyfunerals.com

To send flowers to the family or plant a tree in memory of Gerald Robert Jensen, please visit our Heartfelt Sympathies Store.

Receive notifications about information and event scheduling for Gerald

We encourage you to share your most beloved memories of Gerald here, so that the family and other loved ones can always see it. You can upload cherished photographs, or share your favorite stories, and can even comment on those shared by others.

Posted Feb 14, 2021 at 09:17pm
Gerald Jensen was my grandpa, and while I may not have known him for very long or have known him very well, from everything I did know, he was incredible. He and my grandma, Lois, had a wonderful marriage with 4 great kids and several grandkids. I wish we could have spent more time together but I am grateful to have known him at all, and I love hearing stories about him. I love you grandpa, Rest In Peace.
Comment Share
Share via:
ME

Posted Feb 14, 2021 at 12:55pm
My dad was the best dad I could ever ask for growing up. My parents made us kids feel loved and secure. Dad I can only imagine the joyous reunion you are having with mom. Love you for eternity
Comment Share
Share via:
DR

Posted Feb 14, 2021 at 12:27pm
My dad was a friend to all, and everyone that knew him felt that friendship and love. He and my mom loved being with their family, and in our home we knew we were loved. I will never forget his wake up songs that make me smile and the early morning workouts at BYU field house with my dad. I remember the day he took Marilyn and I to Sears to pick out green Levi jackets that we would wear riding motorcycles. So many other good memories I could and will share with my family. I feel so blessed to have had Gerald and Lois as my loving parents. I am so grateful they can be together again.
Dianne Racine
Comment Share
Share via:

Posted Feb 13, 2021 at 05:11pm
Nancy, our condolences to you and family on Gerald's passing. We will always remember his gentle smile and his kind and gentle ways. He will be missed. Praying for y'all, love, Duane & Karen Stoller
Comment Share
Share via: 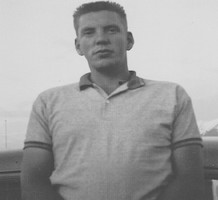