To share your memory on the wall of Geraldine Mortensen, sign in using one of the following options:

Provide comfort for the family of Geraldine Mortensen with a meaningful gesture of sympathy.

She was raised in Lehi and American Fork, UT. She was a proud Caveman and graduated from American Fork High School. She attended Snow College and later married Kendall A Mortensen in the Manti, Utah temple on November 22, 1963. Kendall and Geri attended BYU together.
She graduated and received her degree in Psychology/Sociology in 1965. They moved to Monticello, Utah where Kendall started his career in teaching science and math. The following year they moved to Green River, UT and then they finally arrived in Huntington, Utah in 1967 where Kendall taught for the remainder of his career. Geri was a stay at home mom but also worked jobs cleaning the Post Office and the City Hall. She became a librarian for the Huntington City Public Library in 1983 when the library was adjacent to the Senior Center, and later moved to the new library on Main Street. She was a librarian for 20 years and LOVED working with books and the community, and she gave a great children’s story hour every summer.

She was a member of The Church of Jesus Christ of Latter Day Saints where she held many callings in the Primary, the Young Women’s and the Relief Society. She’ll be remembered for her kindness, compassion, and her great sense of humor. She loved people and made great friendships wherever she went. Though her trials were many and difficult, her positive spirit remained and had a profound impact on her family and all her caregivers.

Funeral services are in the care of Fausett Mortuary. Friends and family may sign the guest book and share memories of Geraldine at www.fausettmortuary.com
Read Less

We encourage you to share your most beloved memories of Geraldine here, so that the family and other loved ones can always see it. You can upload cherished photographs, or share your favorite stories, and can even comment on those shared by others.

Lee and Janine Barnes and family, The Bedell Family, and others have sent flowers to the family of Geraldine Mortensen.
Show you care by sending flowers

Lee and Janine Barnes and family

Lee and Janine Barnes and family purchased flowers for the family of Geraldine Mortensen. Send Flowers

Posted Apr 18, 2019 at 09:26pm
Wishing you peace to bring comfort and loving memories to forever hold in your heart. With much love and deepest sympathy,

The Bedell Family purchased flowers for the family of Geraldine Mortensen. Send Flowers 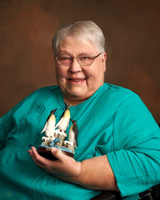