To share your memory on the wall of Lee Jorgensen, sign in using one of the following options:

Lee graduated from Spanish Fork High School and LDS seminary in 1951. He served his country in the U.S. Coast Guard as well as the Springville National Guard, both giving him an honorable discharge. Lee loved his hometown of Salem, where he volunteered in many capacities and was a respected member of the community.

Lee had a great love for nature and felt most at peace when he was in the mountains. He found great joy in sportsmanship hunting, camping or even just taking a drive up the canyon. The mountains were his happy place.

Lee was a man of integrity and his word was as good as gold. He was a strong man with a big heart and was willing to help anyone at any time. He was constantly helping his family and considered his children and grandchildren his greatest treasures in this life, with his wife being his crown jewel.

Lee and Barbara stood side by side for over 55 years. They had a mutual respect and trust that was an example to all who know them, and their love for the other was unconditional. Lee often said Barbara was his rock and strength, and she was at the core of anything good in his life.

Lee is survived by his wife Barbara, their children: Jana (Jeff) Mickleson, Shawn (Ashley) Jorgensen, Jed Jorgensen, and Monica (Larry) Rivas; ten grandchildren, two great-grandchildren and many other honorary family members Lee took in and helped raise as his own. He was preceded in death by his parents.

A funeral service will be held on Friday, March 6, 2020 at 11 am in the LDS meetinghouse located at 60 South Main St., Salem, Utah. Interment will be in the Salem City Cemetery.

To send flowers to the family or plant a tree in memory of Lee Ray Jorgensen, please visit our Heartfelt Sympathies Store.

Receive notifications about information and event scheduling for Lee

We encourage you to share your most beloved memories of Lee here, so that the family and other loved ones can always see it. You can upload cherished photographs, or share your favorite stories, and can even comment on those shared by others.

Heston and Ashley Johns Family sent flowers to the family of Lee Ray Jorgensen.
Show you care by sending flowers

Posted Mar 03, 2020 at 04:51pm
Dear Barbara and family,
I've know Lee all my life, as he was a good friend of my dad (Paul Robinson).
I have memories of Wahoo riding club events (Lee was Jockey of my dads horse in some of the flat track races) as a kid in Salem, and also District Five events some years back now, that I participated in with my husband.
What a wonderful man and example he was.
May God bless each of you and bring you peace and comfort.

Posted Mar 03, 2020 at 02:14pm
We are thinking of you during this difficult time. Bert & Jenny Bradford, Randall & Vicki Bradford

Flowers were purchased for the family of Lee Jorgensen. Send Flowers

Posted Mar 02, 2020 at 03:10pm
I will miss a great friend and and a great neighbor ,good friends are hard to find and when you lose one it hurts like H---
I remember when the 4 of us went to Laughlin, what a great time we had
Judith cooley 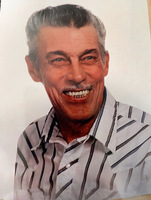