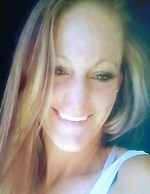 Linsey had a strong relationship with her mom, Melody, and valued the time she spent with her daughter, Hope. She made friends wherever she went and enjoyed traveling when the opportunity presented itself. She had a love for music and she enjoyed art in many different forms.

Linsey is preceded in death by her grandmother, Ida Epsy Carter.

A memorial service will be held Wednesday July 31, 2019 at Mount Timpanogos Park up Provo Canyon starting at 11 am. It will be a potluck style luncheon for a celebration of life.