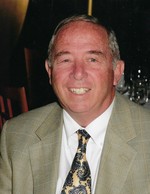 
Norman K Cluff, 81, of Salem, UT passed away January 27, 2022 surround by his family after a valiant fight of Parkinson’s Disease.

Norman was born December 17, 1940 to Benjamin Cluff and Afton Pilkington. He was the youngest of 3 and was always doted on by his 2 older sisters. Norman attended Huntington Park High School where he was always known as the life of the party and quite the jokester. He was often heard walking down the halls yelling “Let’s Party”. Norm was a gifted athlete where he lettered in basketball, track/pole vault, football, and diving.

Norm served an LDS mission to the Eastern Atlantic States mission. After his mission, he moved to Utah, joined the Utah National Guard, attended BYU, as well as started his dream of entrepreneurship as an Architectural Illustrator and Graphic Designer. In 1970, he met the love of his life, Jessica Ann Hatch, where they married in the Los Angeles Temple on June 20, 1970 and were married for over 51 years. Norman and Jessica moved to Orem in 1973, where they had 3 “especially assigned” children, Corey, Nathan, and Lacey. Norman was a very creative mind, where he and Jessica raised their children in a unique home he designed, dubbed “The Round House”. The Cluff home was filled with love, parties (especially the Christmas Eve party Norm couldn’t wait to host each year), visitors, music, and many memories we all cherish.

Norm was a loyal, devoted religious man and truly believed in his faith of the Church of Jesus Christ of Latter Day Saints. Norm was very adventurous as well. He enjoyed all things outdoors, but his favorite past time was fishing. He always enjoyed going to the family cabin in Fairview, UT where he and his family would spend time year-round enjoying fishing, snowmobiling, four-wheeling, and time by the fire telling stories. In 2000, Norm and Jessica moved to Salem, UT where he enjoyed each and everyday walking out his back door to cast a line and fish. Some of the fondest memories with his children were having a little challenge on who could catch the first fish, which he often won. Norm also enjoyed going to the movies. If he couldn’t convince anyone in his family to go with him, he had a slew of friends that accompanied him each week to catch a show.

Preceded in death by his father Benjamin Cluff, mother Afton Pilkington, and sister Arlene Yocum and many other friends and family members whom we are assured welcomed him with open arms as he crossed through the veil.

We’d especially like to give our thanks to iCare Home Health & Hospice for the tender care they provided to him and our family in his final days.

Live-streaming of the funeral can be viewed on Legacy Funerals & Cremations Facebook page.

In lieu of flowers, please donate to the Parkinson’s Foundation in Norm’s name. https://secure3.convio.net/prkorg/site/Donation2?10243.donation=form1&df_id=10243&mfc_pref=T

If at times you find yourself missing him, please remember to go catch a movie, buy some popcorn, and have some fun in his memory!