To share your memory on the wall of Russell Elder, sign in using one of the following options:

After high school, Rus served in the United States Navy for 24 years. He serve... Read More
Russell Alan Elder, age 85, died peacefully on Wednesday, December 23, 2020. A resident of Provo, Utah, he was born in Macomb, Illinois on October 11, 1935.

After high school, Rus served in the United States Navy for 24 years. He served two tours of duty in Vietnam as a combat photographer and photojournalist, was awarded two Purple Hearts, and retired as a Senior Chief. After his time in the Navy, Rus received a Master of Arts degree from Ball State University before starting a long career as a professor of photojournalism at Northern Illinois University.

Rus was a vibrant person--an accomplished photographer, educator, author, and performer. The many years he spent contributing his talents to community theater with the Stage Coach Players in DeKalb, Illinois—both on stage and behind the scenes—was a tremendous source of pride for Rus.

Throughout his life, Rus was well loved for his sense of humor and charm. A lover of science fiction and fantasy, Rus had a special affinity for Star Wars and anything about dragons.

Rus will be interred at Lindquist Mortuary in Ogden, UT. Due to the COVID-19 pandemic, services will be announced at a later date. In lieu of flowers, those who wish to may make a donation to Rescue Mission of Salt Lake or American Cancer Society.

Condolences can be offered at legacyfunerals.com.
Read Less

Receive notifications about information and event scheduling for Russell

There are no events scheduled. You can still show your support by sending flowers directly to the family, or planting a memorial tree in memory of Russell Alan Elder.
Plant a Tree

We encourage you to share your most beloved memories of Russell here, so that the family and other loved ones can always see it. You can upload cherished photographs, or share your favorite stories, and can even comment on those shared by others.

Posted Jan 06, 2021 at 02:07pm
To Rus’s family, Rus had a big impact on me as a student at Northern Illinois University. Even today, so many years later, I still think of things he taught me. He was a vibrant man with a passion for what he did, for what he taught, and for the students he guided. I will continue to keep him in my memories. May your faith and your family and friends console you in this time of grief.
Comment Share
Share via:
ML

Posted Jan 06, 2021 at 10:58am
Rus was my professor at Northern Illinois University in the mid-80s. We reconnected on Facebook in 2013. This is an excerpt from that conversation. It still applies.

"I not only remember you and what you taught me, I use it every day. I've worked in publishing as a photographer, writer, editor and designer since I graduated from NIU in 1984. I started my own business about 10 years ago. So, literally, not a day goes by where I'm not drawing on my NIU education. The tools may have changed, but the principles are the same.

"I suppose everyone who has had any success owes some of it to a teacher who made a difference along the way. For me, that teacher is you. 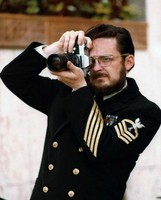