To share your memory on the wall of Ruth Hersh, sign in using one of the following options:

Ruth was the daughter of a cattle rancher and spent her summers on the Fishlake National Forest herding cattle, riding like the wind and swearing just like her dad (Ruth was often disciplined as a child for swearing). At the ripe old age of 6 she kicked J Bracken Lee (Governor) in the shin and called him a SOB for a comment he made that she did not like. Her grandma would put cream on her tongue, to cool the pepper that her mother put on it and say, “chicken little, ya just gatta quit swearing”.

Ruth graduated from South Emery High School in 1944 and received a scholarship to the University of Utah Nursing School. While home on break, she was in a tragic car accident and her leg was badly broken, the pain and long healing time prevented her from continuing floor duty as a nurse. While Ruth was recovering from the injury a curly hair red head came home from WWII, Ruth fell head-over-heels for Tom and he was the love of her life and they were married October 12, 1946. Housing was scarce in the Emery and Carbon areas, but they were able to purchase a home in East Carbon City because the town needed professional residents to support the growing community.

Ruth worked in the local doctor’s office until she was asked to teach school. Ruth loved teaching and adored all her students and it was common for her little ones to line up and get a big hug from her. Teaching adult education was very rewarding to her, she was so proud to see her students be sworn in as citizens of the US. Ruth was an exceptional teacher and was recognized as Teacher of the year.

After Tom’s death, in the Wilberg Mine Disaster, Ruth retired (after 30 years of teaching) and embarked on new interests of traveling and sports. Ruth was a good bowler and competed in several state tournaments, but golf became her love and lifestyle. She lived 6 months in Utah and 6 in Arizona, so she would never have a non-golf day and did not miss the snow. She was a very successful golfer, winning the Carbon Country Club Championship three times and had 4 hole-in-ones. Ruth and her daughter teamed up as golfing partners and won or placed in many team events throughout Utah. They also thought the best tournaments were the ones with a great desert.

Ruth was very social and was the life of a party, she loved to dance and dressed to the hilt when attending parties at the Sun City Country Club. Ruth made friends wherever she went, and she cherished her friendship’s and all the people that brought her joy.

Becky and Terry wish to express our sincere gratitude to the management, CNA care providers and nurses that made her last year’s joyful and comforting at Beehive Homes of Riverton. We also thank the residents and families that have given us their love, friendship and support.

Private family services will be held at Emery Cemetery.

Receive notifications about information and event scheduling for Ruth

There are no events scheduled. You can still show your support by sending flowers directly to the family, or planting a memorial tree in memory of Ruth M Hersh.
Plant a Tree

We encourage you to share your most beloved memories of Ruth here, so that the family and other loved ones can always see it. You can upload cherished photographs, or share your favorite stories, and can even comment on those shared by others.

Posted Jan 19, 2020 at 09:31pm
Dear Bruce and Becky and other descendants of Ruth, I'm so sorry to see of her passing. More than 30 years have passed now since I wrote a Salt Lake Tribune story about her and your dad on the five-year anniversary of Wilberg. Between that disaster and Crandall Canyon, I had the blessed opportunity to meet many family members who touched me deeply with their ability to endure in the face of all that hardship. Your mom stood out among them all and I've always treasured the time she spent with me. And having read the MSHA report and transcripts of miners involved in the rescue effort, I know how much respect the other men had for your dad and could easily understand why she was so devoted to him. In reading her obituary, I enjoyed a good chuckle over your story about her flippant tongue. I remember her as being rather sassy.

Posted Jan 15, 2020 at 06:31pm
Becky and Bruce, we are so sorry to hear of your Mom’s passing.
Ruth was such a lovely kind lady, neighbor, and teacher.
We have cherished memories of watching her ice skate, inviting us
over for homemade root beer, and listening to her play the piano.
We were so touched to see her at our own Mom’s funeral in Price in 2010.
Susan Ferguson Walls, and Kenna Ferguson O’Melveny
Comment Share
Share via:
PM

Posted Jan 05, 2020 at 01:05am
Bruce, Becky & family:
So sorry to hear of your mother's passing. Your mother was a wonderful teacher to all her students. Both kind and
very generous. I would like to offer you and your family my deepest and most sincere condolences and may the soul
of your mother rest in peace.
Comment Share
Share via:
DO

Posted Jan 04, 2020 at 12:51pm
Dear Becky and Terry. I am so sorry for the loss of your mom. I know you have been preparing for this for some time. I love how your mom stayed fast to her spirit and spunk and passed on her own terms. I so enjoyed playing golf with you two, especially if we were a team; not so much when you were my competitors. You made a fearsome twosome that was hard to beat. In fact I think you always bettered me in competition. I will have special memories, admiration and appreciation for Ruth. The world lost a mighty person in a woman of such small stature. Peace be with you. DeAnn
Comment Share
Share via:
J

Posted Jan 04, 2020 at 10:04am
Joyce Caviness
I was the Pharmacist in East Carbon for many years and always looked forward to Ruth returning. She was a special lady
Comment Share
Share via: 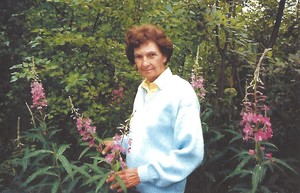