To share your memory on the wall of Sean Wright, sign in using one of the following options:

He was preceded in death by stepsister Connie Walker and nephew Brandon Green.

Sean was a good man with a big heart and was loved by all who knew him. Sean’s children were the most important part of his life. When you ask Sean what he had been doing lately, he always talked about the times he spent with his children, the places they had been and the things they had done, like camping or fishing or just going for a ride. Sean liked to joke and tease people; he had a big wonderful smile. He cared about people with disabilities. It was not unusual for him to take the less fortunate out to lunch.

Sean worked for Complete Contracting Co. in Highland, Utah as a lead man in construction. He was very proud of the work he did.

There will be a memorial and burial at the Helper cemetery at the end of September. Details will be posted at a later date.
Read Less

Receive notifications about information and event scheduling for Sean

There are no events scheduled. You can still show your support by sending flowers directly to the family, or planting a memorial tree in memory of Sean Michael Wright.
Plant a Tree

We encourage you to share your most beloved memories of Sean here, so that the family and other loved ones can always see it. You can upload cherished photographs, or share your favorite stories, and can even comment on those shared by others.

Posted Sep 15, 2019 at 09:05pm
My uncle sean was such an amazing person. I never had a time with him where he didnt make me laugh or smile. He just had that funny, crazy humor that was always enough to make anyone around him laugh. I'll never forget how much he loved to go fishing. I remember staying with him and going fishing everyday after work. I'd always catch the fish and leave them for him to gut and clean hahaha. My uncle Sean was my favorite. I always have looked up to him because of his work ethic and also his family values. Anyone that knew him knew that he loved his family and the time spent with them more than anything. I will miss you so much Uncle Sean. I am so lucky to have had such a great uncle in my life. I love you and miss you!
Your nephew MaCee
Comment Share
Share via:
A

Posted Sep 13, 2019 at 11:45pm
I Have Way To Many To Choose From But My Favorite One ☝️ Was Doing Demo At The Helper Clinic And Remodeling It And Painting It And Doing A Apartment Complex In Linden Painting It And Demoing It
Comment Share
Share via: 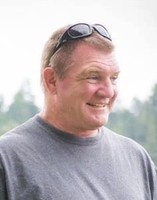