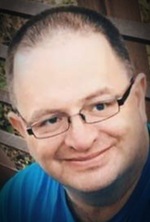 Sidney Lee Smith passed away unexpectedly at home on June 15, 2020. He was born on August 22, 1974 in Salt Lake City, Utah. He grew up in the Kimball Ward and went to Granite High School. While he loved sports of all kinds, football was his passion and he was proud to be the equipment manager for his high school football and basketball teams. Sidney came from an avid scouting family where he learned to work hard and earned his Eagle Scout Award at age 14.

He served an LDS mission in Columbia South Carolina. He then met and was sealed to his first wife, Priscilla D (Smith) Rutledge in the Salt Lake City Temple. Together they had five beautiful children: Bethany, Ethan, Ian, Lianna (deceased), and Julianna. Sidney was currently married to his loving wife Trindy (Olson) Smith, and was stepfather to Treyton Olson. A favorite activity of his and the children was to go through his amazing Pez Collection and sort and categorize them.

He was preceded in death by his sweet daughter Lianna and his loving parents Legrand and Louise Smith. He is survived by his sister, Tracy (Paul) Woodbrey, brother Steven Smith and several Nieces and Nephews who adored him. Sidney was an avid supported of the Semicolon Project, and he would want people to know that if you're in a crisis situation there's help available at the National Suicide Prevention Hotline 1(800) 273-8255.

We plan on holding a celebration of his life which will be announced at a later date. Condolences may be given at legacyfunerals.com