To share your memory on the wall of Val Roberts, sign in using one of the following options:

He joined the United States Army in 1954 and was stationed in Yokohama Bay and Fukuoka, Japan for 18 months.

They were later divorced. He then married Valorie Pulley and they had two children together. Norman Roberts, Evan (Sherry) Roberts. He has many grandchildren and great-grandchildren.

He worked at Spanish Fork Foundry, Backman Foundry, and Macka Supply for many years.
He was a member of The Church of Jesus Christ of Latter-Day Saints.

To send flowers to the family or plant a tree in memory of Val Dee Roberts, please visit our Heartfelt Sympathies Store.

We encourage you to share your most beloved memories of Val here, so that the family and other loved ones can always see it. You can upload cherished photographs, or share your favorite stories, and can even comment on those shared by others. 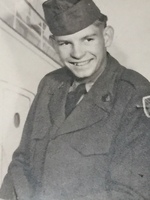